Button out, Vandoorne in for 2017 with odd role swap at McLaren

3 septiembre 2016 / Comentarios desactivados en Button out, Vandoorne in for 2017 with odd role swap at McLaren 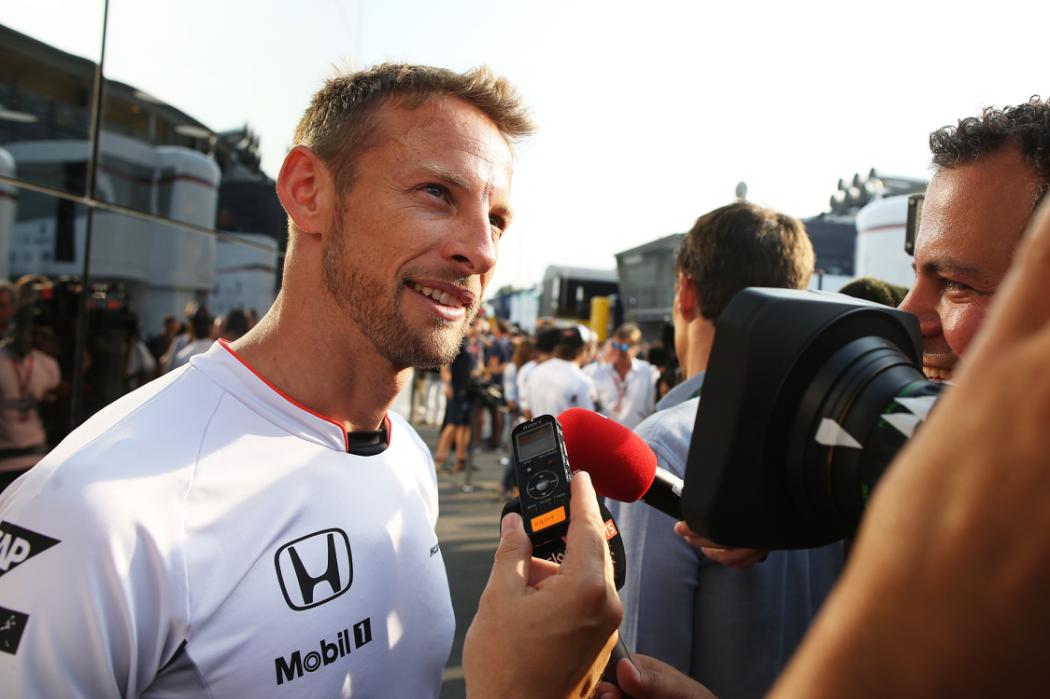 There’s little doubt that Stoffel Vandoorne wasn’t going to wait any longer for a ride at McLaren. If the team didn’t make room for him, his stock was high enough to merit a ride elsewhere. That’s a good problem to have but not a great issue when you have a driver pairing of Fernando Alonso and Jenson Button—arguably one of the best driver pairings on the grid.

What do you do? Negotiate a contractual swapping of roles for Vandoorne and Button and call it an “innovative three-driver strategy”, that’s what you do because you’re Ron Dennis and your command of the English language is both complex and baffling at the same time.

The fact is, Jenson Button was most likely a shoe-in at Williams F1 but before we talk about the money, or lack thereof, they may have offered to retain his services, let’s discuss the notion that McLaren’s Ron Dennis, Mansour Ojjeh and Sheikh Mohammed bin Essa Al Khalifa haven’t always seen eye-to-eye on matters of drivers.

It wasn’t long ago that Ron was keen on Kevin Magnussen while Mansour and the Skeikh were pro-Button. I suppose there is the possibility that keeping Button on board may have been something the latter two board members were keen to do instead of losing him to Williams and perhaps that could have been a reason for the offer to stay and take over as reserve driver.

It’s a tough situation as the team do not want to lose the driving services of the very talented Vandoorne but neither do they want to lose Button. There is also the issue of how much Williams could afford to pay for the services of Button and one has to assume they were not on par with what McLaren were paying him and even possibly offering him to swap seats with Vandoorne under the guise of an “innovative three-driver strategy”.

The fact is, Jenson Button is now a reserve driver and is taking Stoffel’s role while the youngster is taking Jenson’s seat. Jenson has decided that taking a reserve driver role at McLaren is better than actually racing at Williams F1 and perhaps the money has something to do with it but in a small way, I am disappointed that JB would rather drive simulators than actual racing cars on track for Williams.

No matter how disappointed I may be, it doesn’t matter on ounce when it comes to Jenson protecting his long-term ambitions and salary. Perhaps Williams were only willing to offer a one-year deal and McLaren were offering a two-year deal and role in the team beyond his driving days…who knows? JB has to do what’s best for him and one has to think that giving up his seat to Vandoorne and taking over the reserve role is the best thing even though driving at Williams seemed to be a real possibility.

Another question I would have for McLaren is that the reserve role is usually one held out for young and upcoming driver ambitions, not a retirement role for a veteran like Button. IT seems McLaren would rather have a new youngster to replace Vandoorne than an expensive veteran like Button and the Williams gig would have been a better swansong role for the British 2009 world champ to book-end his career.

It’s a very odd move and one that has me thinking McLaren definitely didn’t want to lose Button to Williams and one that may have much more upside in the long-term for Button than the twilight drive at Williams. Regarldess, I’m not attempting to sound heavy-handed here, the race is, Button may not be driving in 2017 but he’s not retiring from his role in F1 per se. He’s becoming a development driver and assisting in the team and car development for McLaren. A role people would give their left arm for, no doubt, but an odd role nonetheless if Button truly wanted to race and not sit in simulators.

Here’s the official statement on what Ron Dennis considers an “innovative three-driver strategy”. See if you think there’s anything “innovative” in takin Vandoorne’s reserve driver role:

McLaren-Honda today announces an innovative three-driver strategy for the 2017 and 2018 Formula 1 seasons.

World Champion and 15-time Grand Prix winner Jenson Button has signed a new contract to extend his relationship with the McLaren-Honda team, is now contracted for two more years, and will consequently continue to play an active role as a key member of the team.

McLaren-Honda’s two race drivers for 2017 will be double World Champion and 32-time Grand Prix winner Fernando Alonso, and the most talented and exciting young driver in the sport today, Stoffel Vandoorne.

“McLaren-Honda’s race driver line-up next season will be Fernando and Stoffel – a perfectly balanced mix of proven brilliance and immense potential.

“But, before I speak on the subject of either of them, I want to talk about Jenson. As a race driver for our team these past seven seasons, he’s been superb, both on and off the track. And, as we’re seeing this season, he remains superb – not only fast and fit but also experienced and expert. He’ll start his 298th Grand Prix tomorrow; as such, he’s the most experienced driver on the grid.

“Having extended his contract to include 2017 and 2018, he’ll continue to be a senior, influential and committed member of the team, and will remain centrally involved in the development of our cars. He’ll also be available to race for us if circumstances require it.

“On behalf of all at McLaren-Honda, I want to say how thrilled we are that Jenson has extended his contractual relationship with us. Moreover, I’m absolutely certain that the depth of his experience and the currency of his expertise will give us an advantage over our opposition next season.

“As for Fernando, 2017 will be his third year as a McLaren-Honda race driver, and I need hardly reaffirm his credentials here. So let me simply restate my belief that he’s one of the finest and fastest Grand Prix drivers I’ve ever seen, and we’re very proud to have him in the team.

“He’s been both diligent and patient over the past two seasons, and he shares with all of us at McLaren-Honda the confidence that 2017 will be the season in which our partnership begins to deliver strong results.

“Stoffel has been a member of the McLaren Young Driver Programme since February 2013, and was appointed our Test and Development Driver 11 months later.

“Over the past two-and-a-half years he’s made a very valuable contribution in that role, learning from his two World Champion team-mates as well as from our many world-class engineers, and, having been runner-up in World Series by Renault in 2013 and the run-away winner of the GP2 Championship last year, he’s now completed with distinction a meticulously designed apprenticeship.

“He’s consequently now ready to race in Formula 1, as his fine Grand Prix debut in Bahrain this year proved.”

“First and foremost, I’m delighted that Jenson will continue to play a big role in our development process. He has been a part of the Honda family for eight years now, and the last two years have been especially challenging, but I’m thankful that, through his experience and quality as a driver, the team has been able to progress at such a significant pace. We have the utmost respect and trust for him to continue working with the team. His knowledge and skills will surely bring out the best of our power unit and chassis and give valuable extra strength and depth.

“Our two race drivers for 2017, Fernando and Stoffel, make for an exceptionally strong and highly motivated pairing. The innovative three-driver approach that McLaren-Honda have announced today is a well-balanced line-up and a positive outcome.

“Working with Fernando for the last two seasons has helped push our development at lightning speed. Our hope is that we can deliver the package that he deserves as soon as possible.

“Finally, we would like to give a warm welcome to Stoffel, who has already shown great maturity and promise in 2016 for McLaren-Honda, as well as working with Honda on the Super Formula project. We look forward to working closely with him next season.”

“I’m delighted that I’ll be staying on as a key member of the McLaren-Honda team. In fact I’m massively excited about my new role, which has come about as a result of a number of in-depth chats with Ron. Specifically, I’m looking forward to becoming even more deeply involved in the team’s efforts to bring about the success we’ve all been striving to deliver.

“I love McLaren-Honda – I firmly believe it’s made up of the best bunch of people I’ve ever worked with – and I have no intention of ever driving for another Formula 1 team.

“To be clear, I’m very definitely not retiring. I’m contracted for both 2017 and 2018, I intend to work hard on car-development, and I’m sure I’ll get behind the wheel of the new car at some point.”

“Although the 2016 season is far from over – and I’m confident we can score some good results before the end of the year – I’m already looking forward to 2017.

“I’m passionately committed to contributing to making McLaren-Honda a winning team, and next year I firmly believe we’ll begin to see the kind of results we’ve all been working so hard to achieve over the past couple of years.

“Jenson has been a brilliant team-mate during that time, and it’s fantastic news that he’s going to continue working alongside us in his new role. He’s a very good driver and a very nice guy, and his car-development skills are second to none. “As for Stoffel, I’ve come across a lot of young drivers over the years, and I know a good one when I see one. I enjoyed working with him when he stood in for me in Bahrain earlier this year, and I’m looking forward to continuing to work with him, and to helping him learn and develop. Together with Jenson, I’m sure he and I can take McLaren-Honda back to its rightful place: at the front of the grid.”

“First of all, I want to express my gratitude to everyone at McLaren-Honda, and especially Ron, for showing faith in me. “I’ve signed loads of autographs in my career, but, when I inked my signature on my McLaren-Honda contract today, it’s safe to say I had an exceptionally special feeling as I picked up my pen to do so.

“It’s an enormous honour to become a McLaren-Honda race driver, and I promise to work as hard as any Formula 1 driver ever has before. “I already know the team extremely well – they’re a fantastic group of extremely clever people – and I’ve already raced the car once and tested it often. I have total confidence in the potential of the McLaren-Honda project, and I firmly believe that, racing alongside a brilliant and experienced driver, I’ll be able to make a strong contribution to the team’s future World Championship successes.

“I’m not saying when that’ll happen, but I’m confident that that’s what the McLaren-Honda team will achieve, and I’m determined to do my bit.

“There are a lot of other people whom I’d like to take this opportunity to thank – too many to list in fact. So all I can say is: you know who you are, and thank you.”