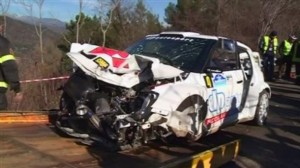 This frame from TV shows the wrecked car of Formula One driver Robert Kubica of Poland. Kubica was injured Sunday Feb. 6 2011 in a rally car accident in Italy just weeks before the start of the new Grand Prix season, his Lotus Renault team said. Local health authority officials in Italy said Kubica’s life was not in danger, and that the worst damage appeared to be to his limbs. ANSA say the driver was 4.6-kilometers from the start of the rally, near Genoa, when his car left the road and hit a wall. His co-driver Jakub Gerber was unhurt, the Lotus Renault team said. (AP Photo / SNTV via APTN) TV OUT