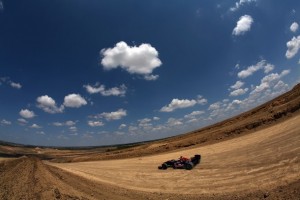 AUSTIN, TX – AUGUST 21: Former Formula One driver David Coulthard of Great Britain pilots the Red Bull Show Car through turn one at Circuit of the Americas race track on August 21, 2011 in Austin, Texas. Couthard and Red Bull F1 are in Austin to promote the U.S. Grand Prix which will be held at the new Circuit of the Americas track in Austin, Texas. (Photo by Tom Pennington/Getty Images for Red Bull)