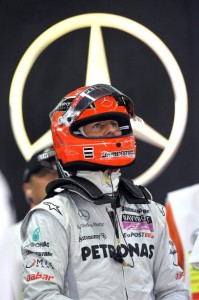 Mercedes driver Michael Schumacher of Germany reviews a race on a monitor as he gets ready in the pit during the second practice session at the Korean International Circuit for Formula One’s Korean Grand Prix in Yeongam on October 22, 2010. A third and final practice session will take place at Yeongam on October 23 ahead of afternoon qualifying for round 16 of the 19-race season. AFP PHOTO/JUNG YEON-JE (Photo credit should read JUNG YEON-JE/AFP/Getty Images)