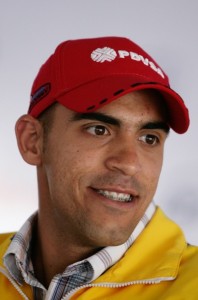 Williams Formula One driver Pastor Maldonado of Venezuela smiles during a news conference in Caracas January 6, 2011. Maldonado spoke about the importance of his upcoming Formula One debut, having signed with the Williams team in early December 2010. Maldonado, who won the GP2 title in 2010, also praised his Brazilian teammate, Rubens Barrichello, who he will join at Williams, one of the three great teams of F1, along with Ferrari and McLaren. REUTERS/Gil Montano (VENEZUELA – Tags: SPORT MOTOR RACING)