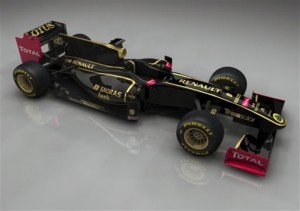 Image released by Renault F1 motor racing on Wednesday Dec 8 2010 of the new F1 car livery. Group Lotus has teamed up with Renault for the 2011 Formula One championship, creating further uncertainty over the use of the famous name. Lotus reappeared in F1 in 2010 after a 16-year absence with Group Lotus leasing the name to Tony Fernandes’ Lotus Racing, but Renault announced Wednesday a new seven-season agreement to create Lotus Renault GP. Fernandes is pursuing a case through London’s High Court to keep the right to use the Team Lotus name. (AP Photo/ RenaultF1) ** NO SALES EDITORIAL USE ONLY