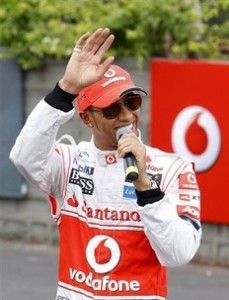 McLaren F1 driver Lewis Hamilton of Britain acknowledges the crowd after performing at the Bangalore-Mysore highway during a promotional event ahead of the India Formula One Grand Prix, on the outskirts of Bangalore, India, Tuesday, Sept. 27, 2011. The India Grand Prix is scheduled to be held for the first time in the country in New Delhi on Oct. 30. (AP Photo/Aijaz Rahi)