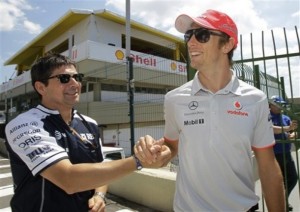 McLaren Mercedes driver Jenson Button of Britain, right, is welcomed by an unidentified Williams member as he arrives in the paddock prior to the start of Brazil’s Formula One Grand prix at the Interlagos race track in Sao Paulo, Brazil, Sunday Nov. 7, 2010. Armed men attempted to attack the car carrying defending Formula One champion Jenson Button as he left the track after qualifying for the Brazilian Grand Prix on Saturday, according to his team. McLaren said Button was driven away from danger and nobody was hurt in what appeared to be a robbery attempt near the Interlagos circuit in South America’s biggest city. (AP Photo/Luca Bruno)