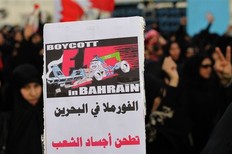 Bahraini anti-government protesters carry a poster calling for a boycott of next weekend’s Formula One Bahrain Grand Prix during a march Sunday, April 15, 2012, in Sehla, Bahrain, near the capital of Manama. The Arabic reads, «formula in Bahrain is crushing the bodies of the people.» Thousands of protesters, many waving national flags, called for the fall of the Bahraini regime and freedom for political prisoners. (AP Photo/Hasan Jamali)