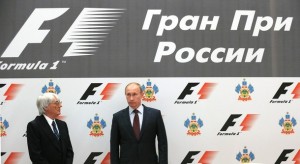 Formula One racing director Bernie Ecclestone (L) and Russian Prime Minister Vladimir Putin attend a ceremony on October 14, 2010 after Ecclestone has agreed terms with Russia for the country to hold its first Grand Prix in Winter Olympics host city Sochi in 2014. Ecclestone told the Kommersant daily that after several rounds of negotiations conditions for the contract have been agreed and they had been given the document. AFP PHOTO/ ALEXANDER NEMENOV (Photo credit should read ALEXANDER NEMENOV/AFP/Getty Images)