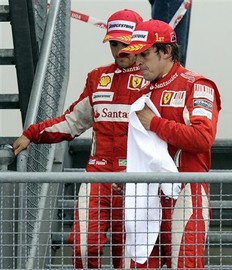 Ferrari Formula One driver Fernando Alonso of Spain, right, and teammate Felipe Massa of Brazil leaving the podium after the ceremony of the German Formula One Grand Prix in Hockenheim, Germany, Sunday, July 25, 2010. Ferrari driver Felipe Massa of Brazil, left, finished second, after he was overtaken by the winner Alonso a few rounds before the end of the race. (AP Photo/Martin Meissner)