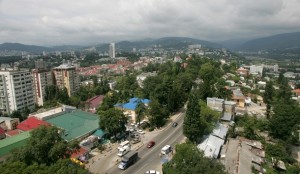 (FILE) A file picture taken on July 3, 2007, shows a general view of the Black Sea resort of Sochi. Russia is making a renewed bid to bring Formula One racing to Sochi with F1 supremo Bernie Ecclestone agreeing terms for a Grand Prix to be held in 2014, the same year the Black Sea resort hosts the Winter Olympics. Russian Prime Minister Vladimir Putin, whose backing was crucial in Sochi winning the right to host the Games, is due in the city on October 14, 2010 to sign an agreement for work to begin on the construction of a new 200 million dollar circuit. AFP PHOTO/ MAXIM MARMUR (Photo credit should read MAXIM MARMUR/AFP/Getty Images)