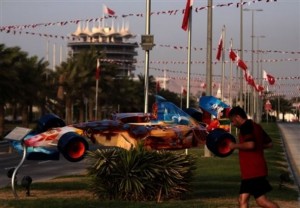 An unidentified man jogs past the entry to the Bahrain International Circuit in Sakhir, Bahrain, on Thursday, June 2, 2011. Formula One’s governing body will decide Friday whether to reschedule the Bahrain Grand Prix for later this season, with some drivers and team officials saying the race should be scrapped. Bahrain organizers insist they are ready to host the race, which was meant to open the season but was postponed following anti-government protests in February that eventually left at least 30 dead following a brutal crackdown. (AP Photo/Hasan Jamali)