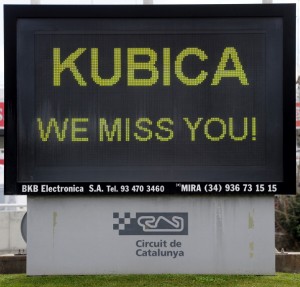 A big screen reading ‘Kubica we miss you’ dedicated to Formula One driver Robert Kubica is seen during a training session on February 19, 2011 at Catalunya’s racetrack in Montmelo, near Barcelona. Robert Kubica has begun physiotherapy on February 18 after undergoing a third operation on injuries sustained during a horror crash over a week ago. The Pole spent eight hours in surgery at the Santa Corona hospital in Pietra Ligure, Liguria, on February 16 to repair damage to the outer part of his elbow.AFP PHOTO/JOSEP LAGO (Photo credit should read JOSEP LAGO/AFP/Getty Images)