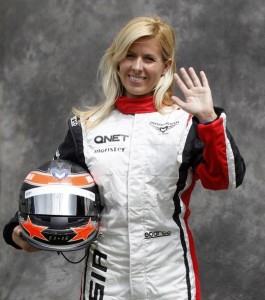 Marussia Formula One test driver Maria de Villota of Spain poses prior to the Australian F1 Grand Prix at the Albert Park circuit in Melbourne in this March 15, 2012 file photo. De Villota has been injured in an accident while she was driving the team’s Formula One car in eastern England, the BBC and Sky television reported on July 3, 2012. REUTERS/Daniel Munoz/Files (AUSTRALIA – Tags: SPORT MOTORSPORT)