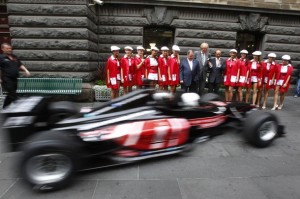 A racing car pulls up as grid girls pose for photos at a media event for the Australian Formula One Grand Prix in Melbourne March 22, 2011. The Australian F1 race, to be held on March 27, is the first race of the season after the event was cancelled in Bahrain due to political unrest. REUTERS/Mick Tsikas (AUSTRALIA – Tags: SPORT MOTOR RACING)