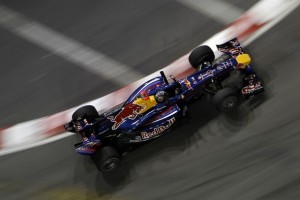 Red Bull Formula One driver Sebastian Vettel of Germany drives during the Singapore F1 Grand Prix at the Marina Bay circuit September 26, 2010. Formula One has four rookie drivers this year and only one, Sauber’s 21-year-old Mexican Sergio Perez, is younger than world champion Sebastian Vettel. It is all too easy, given everything that the 23-year-old German wunderkind has achieved on his rapid ascent to the pinnacle of world motorsport, to forget just how young the Red Bull driver is. Picture taken September 26, 2010. To match Feature MOTOR RACING/REDBULL REUTERS/Edgar Su/Files (SINGAPORE – Tags: SPORT MOTOR RACING)