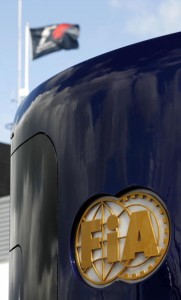 Picture of the FIA logo and a Formula One flag taken in the paddock of the Silverstone circuit on June 19, 2009 in Silverstone, before the first free practice session of the British Formula One Grand Prix. The Formula One Teams Association (FOTA) announced it would set up a rival championship next season. FOTA’s announcement threw Formula One into disarray on the eve of this weekend’s British Grand Prix after months of wrangling over the FIA’s plans to introduce rule changes, most notably a budget cap, for next season in an attempt to revamp the sport. «The FIA is disappointed but not surprised by FOTA’s inability to reach a compromise in the best interests of the sport,» the FIA said in a statement. AFP PHOTO / GUILLAUME BAPTISTE (Photo credit should read GUILLAUME BAPTISTE/AFP/Getty Images)