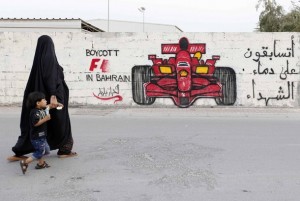 A woman and her child passes in front of anti-Formula One graffiti in the village of Barbar, west of Manama April 5, 2012. Former world champion Damon Hill has called on Formula 1 bosses to reconsider going ahead with this month’s controversial Bahrain Grand Prix and warned that the sport’s image could suffer if the race is held. The graffiti reads, “Boycott F1 in Bahrain, you will race on the blood of martyrs.” REUTERS/Hamad I Mohammed (BAHRAIN – Tags: CIVIL UNREST POLITICS SPORT MOTORSPORT)